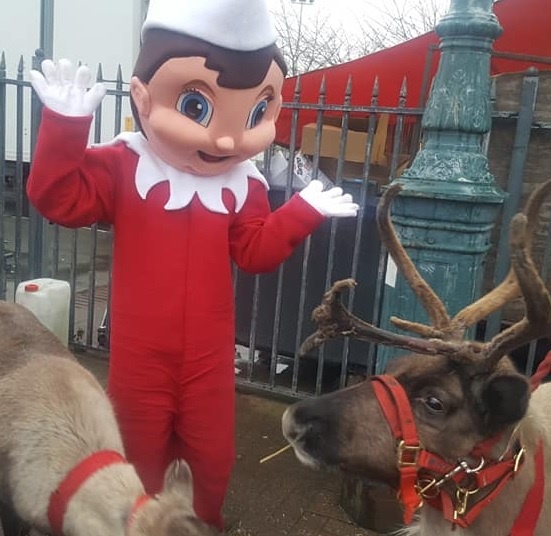 Halton Borough Council and Widnes Market traders would like to say a big thank you to all those who came to see Santa in his grotto over the festive season.

More than 1,500 children met Father Christmas and had a photo with him in his grotto over the five days that the big man was able to visit the Market, with more than £1,500 raised for charity.

Market traders worked hard preparing the grotto and the festive waiting area, which was needed due to the popularity of the grotto. It was in fact so busy that Santa only had one gift left in his sack on his final day!

Sharon, who visited with her daughter said : “What a fantastic time my daughter had meeting Santa this year at the Widnes Market. The entertainment was so great while waiting to see Santa. All the staff where so nice, polite and friendly. The face painting was A1 and free for all children which really helps families at this time of year.”

The market was also lucky enough to have visits from Santa’ reindeer and the H’arts and Voices Choir made a very festive appearance on the middle weekend of December, to entertain shoppers.

During the year Widnes Market has been collecting for two charities, Stick N Step and Guide Dogs for the blind and donations made over the Christmas period will be added to the total with the aim to raise £5000 this year.

Everyone involved  would like to thank all those who were kind enough to donate this year and the grand total will be announced very soon.

Councillor Ron Hignett, Halton Borough Council Executive member for the Physical Environment, said: “This was a great effort by the traders and just goes to show the value of a local market in providing for all the community at a time when money can be tight. Well done to everyone concerned.”

CHRISTMAS EVENTS IN RUNCORN AND WIDNES