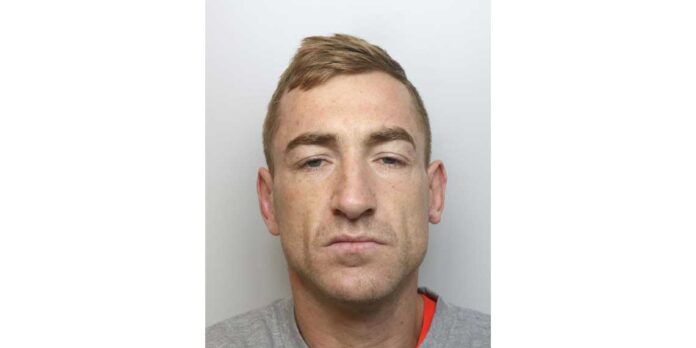 A 33-year-old has been jailed after stabbing a fellow Widnes man with a screwdriver and a pair of scissors.

He returned to the court to be sentenced on Friday 18 September.

Collins was jailed for eight years, and given an additional four years on licence.

The incident occurred at a flat in Dean Street, Widnes, on Friday 31 July.

The victim, a local man in his 20s, had been told by a friend that Collins was looking for him.

He let Collins, an acquaintance of his, into the flat at about 10pm.

Once inside, Collins grabbed a screwdriver from the top of a book unit, demanded money from the victim and threatened to stab him.

With the victim stating that he did not have any money, Collins stabbed him twice in the side, once with the screwdriver and once with scissors that were in the flat.

Collins also threw the victim around the flat and strangled him.

After being stabbed by the scissors, the victim managed to climb out of a window and escape to a friend’s address.

Collins had tried to pull him back in from the window.

Police and paramedics were called to the friend’s address and the victim was subsequently taken to hospital to receive treatment for the injuries he sustained as a result of the incident.

None of the injuries were serious ones and he was discharged the following day.

Police quickly identified Collins as being the man responsible for the victim’s injuries but he fled when officers knocked at his door.

Following a sustained manhunt, Collins was located and arrested in the Appleton area of Widnes at around 5pm on Wednesday 5 August.

He denied assaulting the victim when interviewed in custody but pleaded guilty as soon as the case progressed to a crown court.

Following his sentencing, Detective Constable Rob Catterall, who led the investigation on behalf of Widnes Local Policing Unit, said: “Mark Collins subjected the victim to a vicious and sustained assault in a bid to steal money from him.

“The victim sustained two puncture wounds to his side, as well as minor injuries to his neck, stomach and arm, before managing to escape Collins’ clutches.

“He had no idea that he was going to be assaulted when he let Collins into the flat, and the frightening ordeal he was forced to endure understandably left him extremely shaken up.

“I am delighted that Collins is now behind bars facing the consequences of his actions and I hope that the culmination of this case and the length of the custodial sentence he has received gives his victim some closure and enables him to begin to move forward with his life.

“I also hope that this case and the sentence imposed by Liverpool Crown Court deters others from committing similar offences.”

David Keane, police and crime commissioner for Cheshire, added: “Considering the nature of the assault he was subjected to, the victim in this case is lucky to have not sustained more serious injuries.

“Violent incidents of this nature are completely unacceptable, and I would like to thank the officers who have been involved in securing this conviction for their hard work and dedication.

“I hope that this case reassures residents that Cheshire Constabulary is committed to bringing violent offenders to justice and making our communities safer places to live, work and visit.”