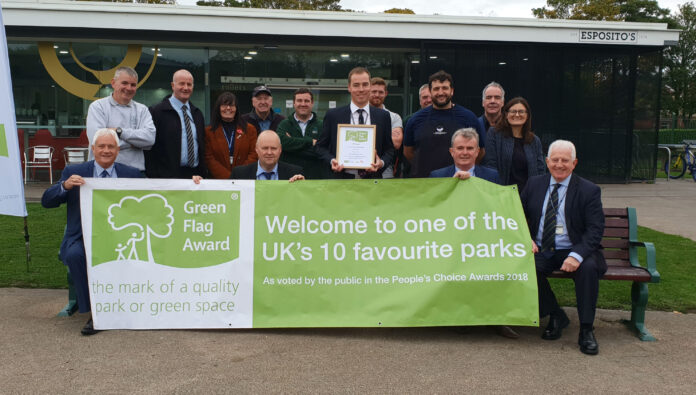 Today, our very own Victoria Park in Widnes, run by Halton Borough Council, has been announced by Green Flag Award as one of the winners of the 2018 People’s Choice vote, beating hundreds of others to be in the top five in the UK.

It is the only park in Cheshire or the whole North West of England to make the cut.

With more than 1,800 sites to choose from – all of which meet the high standards demanded by the Green Flag Award, the international quality marks for parks and green spaces – the public has chosen its ten favourites.

Victoria Park is one of a top ten that includes a university campus, a town park, a woodland and a nature reserve. According to TripAdvisor it is the number one attraction in Widnes.

And we can today exclusively reveal the park was actually in the top five.

“We know that parks matter to people and that those tasked with looking after them have faced and are facing some significant challenges.

“This award is the public’s way of showing just how much they value their parks and an acknowledgement to the hard work of the teams that make them such great places.”

People were asked to vote for their favourite national park in an online vote in September.

Halton Borough Council’s Executive Board Member for the Physical Enviroment, Cllr Ron Hignett, said: “We are very proud of Victoria Park. The award is a credit to the hard work frontline staff and volunteers put in to keep it in such great shape.”

The nine other winners of the 2018 People’s Choice Award alongside Victoria Park are:

*Runcorn Hill in Runcorn, Cheshire, was in the top 25. Making it a double success for Halton.

Victoria Park is situated close to Widnes Town Centre. It holds the prestgious Green Flag award and is regarded as Halton’s premier park. Opened in 1900 to celebrate the Diamond Jubilee of Queen Victoria, Heritage Lottery funding has restored Victoria Park to its former splendour and enabled the replacement of the major features that had disappeared over the years such as the bandstand, fountain and lake.

The Green Flag Awards Scheme (http://greenflagaward.org/) is run by the environmental charity Keep Britain Tidy, under licence from the Ministry of Housing, Communities and Local Government, in partnership with Keep Scotland Beautiful, Keep Wales Tidy and Keep Northern Ireland Beautiful.

HALTON’S MAYOR IS MADE HONORARY ROTARIAN