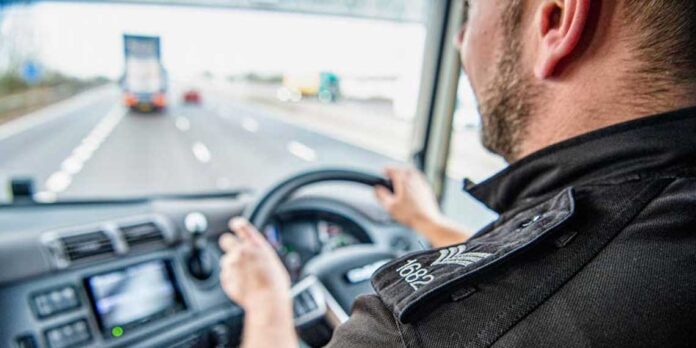 More than 20 fines have been issued as part of a road safety operation focusing on heavy goods vehicle drivers and all other motorists in Cheshire.

The three-day operation, which took place on the week starting Monday 3 May, saw an unmarked HGV patrolling motorways and main roads across the county to identify any offences being committed.

There was a particular focus on ensuring that commercial hauliers are travelling safely on the local road network.

In total, 25 fines were issued during the operation, which was held in conjunction with Highways England as part of Op Tramline, a joint national initiative aimed at changing driver behaviour.

The fines were given to 14 motorists who were not wearing a seat belt, six who were using their mobile phone while driving and five who committed other offences.

Two wanted people were also arrested during the operation.

Police Constable Tom Dale said: “HGVs can be deadly if they are not driven properly.

“While the majority of HGV drivers are extremely professional, sadly there are some who believe that, because their cab is out of other motorists’ views, they can get away with breaking the law and won’t have to face the consequences.

“Our unmarked HGV is a valuable tool, with the elevated view enabling officers to see exactly what is going on inside the cab of every HGV and quickly identify any offences which wouldn’t normally be seen from a patrol car.

“However, the operation held in conjunction with Highways England was not just targeting HGV drivers. We were on the lockout for offences being committed by any motorist.

“During the operation the team identified 25 offending drivers. All of them are facing fines as a result of their actions behind the wheel.

“I hope that the operation acts as a warning to lorry drivers and all other motorists and reiterates the fact that no-one is above the law.

“While this operation may have concluded, officers will continue to use the unmarked HGV to patrol the road network across the county.”

Highways England’s Assistant Regional Safety Co-ordinator Marie Biddulph added: “Hundreds of thousands of drivers use our roads every day. The vast majority of them are sensible behind the wheel, but some put themselves and others at risk.

“We introduced our HGV supercabs to help keep the roads safe and tackle dangerous driving by people who have either got into bad habits or are simply ignoring the law.

“We hope the supercabs will encourage everyone to think about what more they could do to improve how they drive.”

Superintendent Jon Betts, head of Cheshire Constabulary’s Roads and Crime Unit, said: “Driving a motor vehicle is a privilege, not a right, and it comes with great responsibility to act within the rules laid down when you pass your test.

“When you deliberately ignore those rules, you put yourself and other people at considerable risk.

“The five main contributory factors that cause serious road traffic collisions are speeding, driving under the influence of drugs or alcohol, driving carelessly, not wearing a seat belt and driving while using a mobile phone. Together, these are known as the Fatal 5.

“We launched our Fatal 5 campaign at the beginning of 2019 to raise awareness of the importance of driving safely, adhering to speed limits and not committing any potentially deadly driving offences.

“The message for motorists is don’t put your life, and the lives of other road users and pedestrians, at risk – slow down, pay attention, wear your seat belt, put your phone down, don’t drink or drug drive and make sure that your vehicle is safe for the roads.”