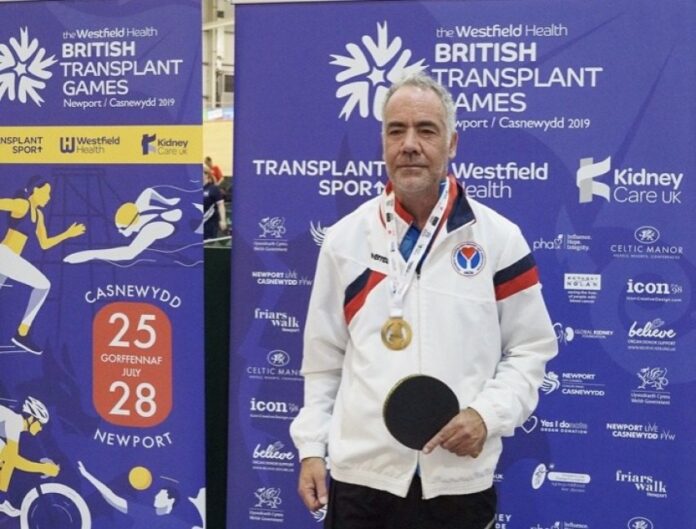 A Halton Borough Council employee with 25 per cent of a normal person’s lung capacity, who is only here because of the kindness of a dead stranger is celebrating after bringing back a gold medal from the British Transplant Games in Newport, Wales.

The Halton Table Tennis Club player, who grew up in Cannock Wood, is now British champion for his age category and hoped to encourage more people to #havetheconversation about organ donation.

Mark Allen, aged 47, has now more than a dozen British medals to add to a number of European titles, all in table tennis.

The former journalist, who had a double lung transplant in 2005, also needs a new kidney and had to go to have his medal ceremony early so he could drive to Cardiff for dialysis.

The former teacher and journalist was born with Cystic Fibrosis but has tried not to let it hold him back, having lived in Holland, Australia, USA and South Korea among other places. He also developed diabetes as a result of the CF.

The anti-rejection drugs are toxic to the kidneys and he has to have dialysis three times a week, which he fits around a full time job.

He also plays keyboard in a band, The Gifted Organs and can often be found at gigs, watching Widnes Wild ice hockey team, cricket or Aston Villa.

Mark, who has worked for The Express and Star, Lichfield Mercury, Staffordshire Newsletter, Cannock Chronicle among other papers and taught in Australia and South Korea, as well as working for Greenpeace,  said: “The idea of the transplant games is to raise awareness of what can be achieved.

“We don’t just need people to sign up to the Organ Donor Register. We also need people to have to conversation with their families and loved ones. As even with presumed consent, relatives can overturn a dead person’s wishes.

“I also enjoy caching up with friends and competitors, many I only see once a year. By the nature of our conditions it may always be the last time I see them, so we make the most of it.”

Mark represents Newcastle Freeman at the British Games and Team GB at the European Heart and Lung Games, which have taken him to Italy, Holland, Lithuania, Finland and Sweden

The Westfield Health British Transplant Games took place over four days in Newport, South Wales, with hundreds of athletes from all over GB and Northern Ireland. It ended with a gala dinner on Sunday night.

Mark also took part in indoor bowls, the ball throw and the fancy dress 3k donor run/walk, which athletes do each year to honour their donor.