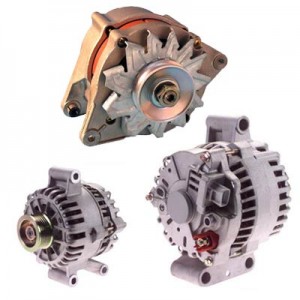 What is an alternator?An alternator keeps your vehicle’s battery charged. It also provides power to operate your lights and other electronic accessories whilst your car is running.

Symptoms of a bad alternator

Symptoms of a bad alternator include hard or slow cranking when you try to start your vehicle, lights that seem too dim and of course the red BATT, ALT or GEN light glowing on the dash. But if the lights don’t come on the dash, that doesn’t mean you’re safe, you can have an alternator problem without the lights appearing, because it’s the alternator that makes the lights appear in the first place, so if it’s stopped working then no lights may show.

If your car starts and runs, or if the engine turns over normally when you try to start it but it won’t actually run, there is probably nothing wrong with your alternator, starter or battery. Which means your alternator is probably functioning properly.

The only exception is if the alternator is overcharging, in other words it’s putting out too much voltage. This can cause malfunctions to the vehicles computer, while the engine is running and causes all sorts of weird problems. An overcharging alternator can boil a battery dry, so if your battery gets low on electrolyte, making you add water to it, or if your car eats batteries, you may have an overcharging alternator.

Are you sure it’s the alternator?

Bad battery symptoms and bad starter symptoms can be very much like bad alternator symptoms. Make sure it’s the alternator before you come to us for it to be repaired/replaced or you may still have a problem on your hands. A properly operating alternator cannot charge a bad battery and a new fully charged battery can’t spin over a bad starter.

The best method of testing a bad alternator is with a voltmeter. Put a voltmeter across the battery whilst the engine is running. Voltage should be 14.2 volts. Any lower than 14 volts or any higher than 14.4 volts could mean an alternator problem. Turn on the lights and the vehicle’s accessories and the voltage should stay up around 13 volts. An idle engine up to 2000 RPM will have the voltage of around 14 or so. (Testing numbers are for 12 volt systems, numbers can be easily determined, depending on what volt system you have).

Although, if you voltage goes up to 14.2 volts, then you need no alternator repair.

Here at Widnes Autoelectrics, we can test your alternator for you, saving you the time and effort of doing so. Plus if we find a fault with it during our tests, we’ll determine the cause of the fault and will either repair the fault or fit your vehicle with a brand new alternator. To find out more or if you’d like to book your vehicle in for testing and any possible repairs, then please get into contact with us here.

It’s so tasty – Spinach and Feta Quiche is your latest adventure in the...