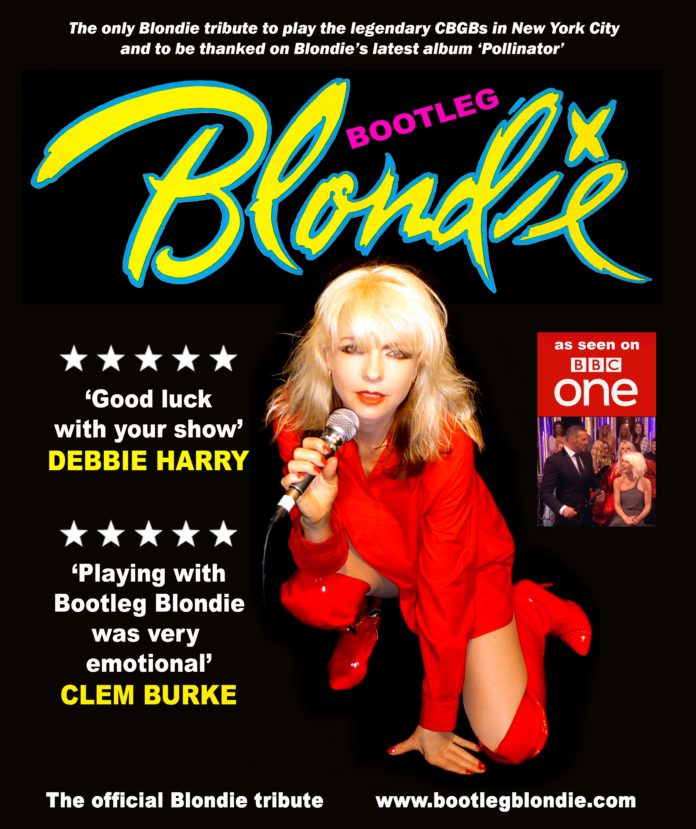 It is the only Blondie tribute to play the legendary CBGB’s in New York City and to have the honour to be mentioned on Blondie’s 11th album Pollinator.

Lead vocalist Debbie Harris appeared on two shows for BBC1 when she was picked out of 15,000 applicants to represent Debbie Harry on ‘Even Better Than The Real Thing’ hosted by Paddy McGuinness. The show drew in nearly 4 million viewers on the pilot episode alone.

Band members have played the Isle Of Wight Festival, the 100 Club, the Hammersmith Palais, The Electric Ballroom in London and can be seen at all the major venues and festivals around the UK and Europe.

Blondie drummer Clem Burke came along to a Bootleg Blondie gig and actually got up and played drums on stage with the band! He said afterwards that watching and playing with Bootleg Blondie was very emotional.

Expect all the classics; Heart of Glass, Sunday Girl, Atomic, Hangin’ on the Telephone, Call Me and many more.
Tickets are £18 from www.thebrindley.org.uk and the Brindley box office on 0151 907 8360.

Scambusters – How much money has been saved by Cheshire Police?

#HALTONREADATHON – WE SMASHED IT! WELL DONE EVERYONE!