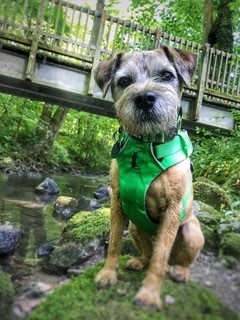 Being an actor can be a dog’s life. But dogs can actually be good actors, as anyone who has seen the Lassie films will testify. And we saw eight hopeful hounds attend ‘paw’-ditions at The Brindley.

Dazzling costumes, fabulous scenery and some truly magical surprises are just a few of the things successful hounds can expect.

Experts were looking for three prize pooches to play the part of Belle best friend, on different nights at The #Brindleypanto.

Denise Shenton is Ness and Harris Tweed’s owner and lives in Runcorn. She said she couldn’t wait for her four-legged-friends to tread the boards.

“To have both our dogs appearing is fantastic. They follow in famous paw-steps such as Lassie and Toto!”

Toby is from from Northwich.

Three children’s casts will alternate performances between Monday 10 December, 2018 and Sunday 13 January, 2019 which will include some schools performances.

Sugagabes singer Amelle Berrabah will star in the glittering production.

Dame Rob Squire and Scouse actor Charlie Griffiths were recently revealed as returning to the glittering cast, for the magical tale.