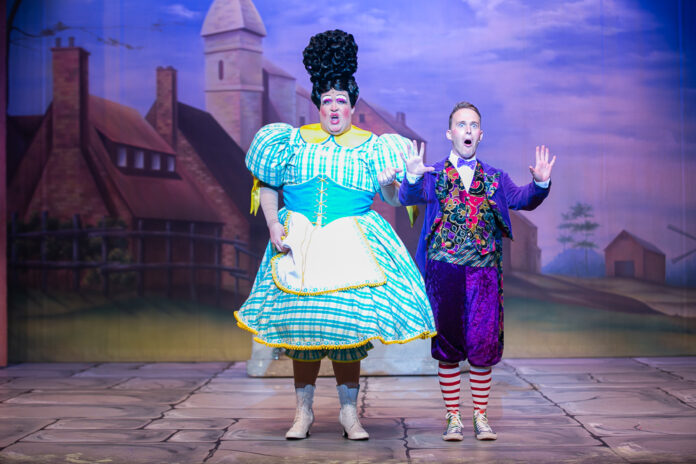 Not long now to catch our glittering Brindley panto, Beauty and the Beast, which has had fabulous reviews in the media. The Liverpool Echo raved about the production, with reviewer Catherine Jones giving it four stars.

Halton Community Radio loved it, Cheshire Life has rated it one of the best in the region, and there was dozens of positive reviews online.

Lynne Everett said: “We’ve just got home from the pantomime and we have had a brilliant time – it was my three year old daughter’s first panto and she absolutely loved it.

“She was talking about it non-stop on the way home and is now flat out after all the dancing and clapping she’s been doing! The theatre is the perfect size and we had a great view from the balcony – we’ll definitely be booking again next year. Well done to all of the cast and Brindley Staff.”

Pauline Sinnott enthused on Halton Borough Councils’ Facebook page: ” Truly entertaining afternoon with my family and friends @TheBrindley for this year’s panto. Brilliant? Wasn’t wasn’t wasn’t – was was was.”

Kevin Teeling posted to the Brindley Facebook site: ” Just been to see Beauty and the beast with my family, highly recommended, great fun, the cast are superb with some great singing performances. everything a panto should be. Well done to all.”

While Victoria Shaw posted: ” Just watched Beauty And The Beast – absolutely brilliant production and fantastic family fun. If you haven’t already got tickets, buy them now!”

On Tripadvisor comments included: “Another great family Panto… thank you to all involved. We are lucky to have the Brindley on our doorstep that puts on a fantastic panto each year.”

“We absolutely loved it. The actors, singers, dancers and musicians were amazing. Even my two year old who gets bored very easily was mesmerised. We will be back next year for sure!

“This has got to be one of the best pantomimes around. Well worth the visit. Great interaction with the crowd. The dancers were all brilliant and everyone in the cast looked like they where having a ball.”

Sugababes ‘Red Dress’ singer Amelle Berrabah stars in the glittering production. She joined the Sugababes in 2005 after their manager had seen her perform years earlier as a member of Amelle’s first band, Boo2.

Dame Rob Squire returned to the Halton Borough Council venue this year. Charlie Griffithsis also returned to the cast, for the magical tale. And veteran actor Dean Harris, who has a huge CV of TV, theatre and film roles, has probed very popular.

Beauty And The Beast, presented by Polka Dot Pantomines, runs to 13 January 2019.

Quadrophenia – ‘Who’ wants to see it in Halton?

Eat Healthy in the New Year

Hydrogen trains to be developed in Widnes