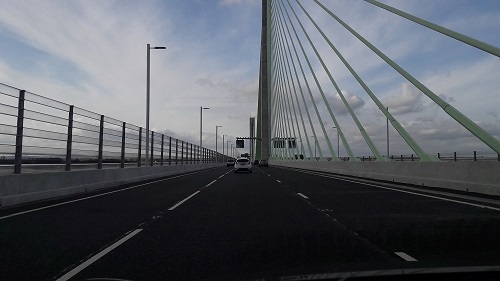 MOTORISTS using the new Mersey Gateway Bridge were slapped with nearly £2.8m of fines in the first three months it was open to traffic.

Figures obtained under a Freedom of Information request by the Local Democracy Reporting Service reveal the extent to the fines paid by drivers who failed to pay the £2 toll before being issued with fixed penalty charge notices by Halton Council.

The charges were issued for crossings of the six-lane bridge over the River Mersey between Widnes and Runcorn between October and January.

The Scrap Mersey Tolls campaign group has described the figure as “shocking” and claimed that the total number of fines will increase.

A spokesperson for the group said: “Local politicians should be ashamed that they have inflicted such a widespread burden of financial misery.”

Car drivers pay £2 to use the crossing but it is free to use for Halton residents who pay an administration fee.

The Mersey Gateway bridge has no toll booths and motorists who have not paid in advance have until 11.59pm after their journey to pay.

People who fail to pay the toll face a penalty charge of £40 which is reduced to £20 if you pay within 14 days.

The fines are paid to Merseyflow and Halton Council authorise them.

In April the council said 10 million vehicles had crossed the bridge since it opened in October and 250,000 penalty charge notices had been issued.

The operators estimated £1m of fines had been issued to drivers in the first month.
It has also emerged that drivers who break down on the bridge face hefty recovery charges.

Stranded motorists are not allowed to arrange their own vehicle recovery and must pay a minimum fee of £150.

The council has confirmed that the FOI figures are correct.

Come and join in the farmyard fun

Come to our ‘Healthy Lungs Event’ at Halton Stadium