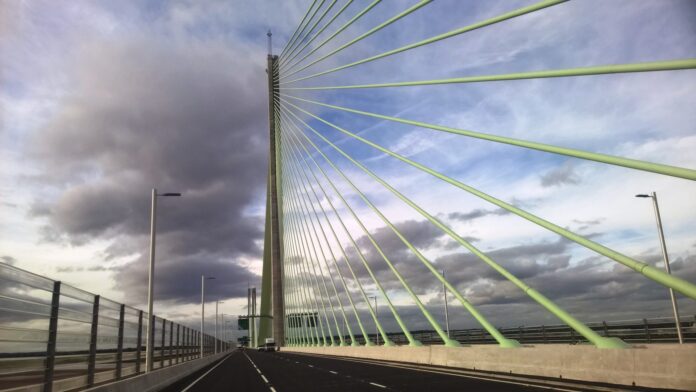 The Mersey Gateway has been awarded the prestigious Infrastructure Award at the RICS Grand Final following its earlier Project of the Year win at the regional heats.

The award recognises outstanding achievement by a project in its innovation, value for money, effect on the community and society in general and its overall design performance.

The project was shortlisted amongst nine other infrastructure projects across the country, each recipients of a regional title. The Mersey Gateway was awarded with the Infrastructure Award and the overall Project of the Year at the North West awards earlier this year.

Mike Bennett, Managing Director of the Mersey Gateway Crossings Board said, “We’re delighted to have been recognised by the RICS on both a regional and national level.”

“The landmark new bridge has welcomed over 23 million journeys exceeding our high expectations and is bringing transport and economic benefits to the local community in Halton and the wider North West.”

“Throughout construction and now in its operational phase, we have had a fantastic team of people who have worked tirelessly to make this project a success and everyone involved should be fantastically proud.”

The RICS: Royal Institution of Chartered Surveyors is the global professional body which promote and enforce the highest international standards in the valuation, management and development of land, real estate, construction and infrastructure.

Alan Scarisbrick FRICS, Director at Scarisbrick Estates, is a Chartered Development Surveyor and Fellow of the RICS who has worked on the project for 11 years co-ordinating land assembly, enabling and accommodation works. He said,

“I feel very fortunate to have had the opportunity to work on such a regionally significant project.”

“Whilst it is appreciated that large infrastructure projects are predominantly engineer-led, receiving the RICS Property Award 2018 for Infrastructure is a fitting recognition for the land assembly team and all the Chartered Surveyors that had a role in the delivery of the project”.

Chair of the national RICS judges, David Brooks Wilson FRICS Chairman and CEO at Noble Wilson said: “The RICS Awards, Grand Final showcases the very best, community-led built projects – of all sizes and budgets – from all over the UK, and this year’s national winners are a true testament to the successful collaboration of the teams behind them.”

“Each of these winning projects is having a profoundly positive impact on its local area and proving to be a cornerstone of the community, and for that, the teams behind them should be very proud.”