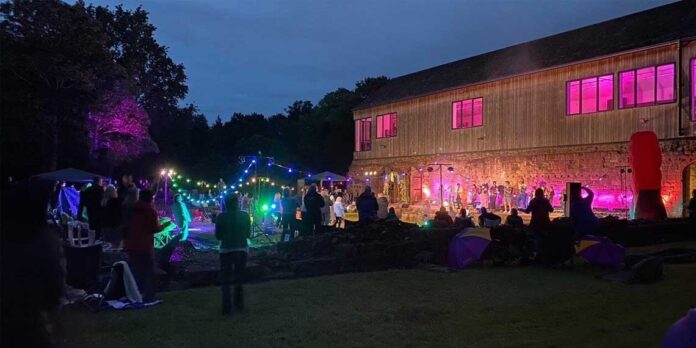 A magical, musical adaptation of A Midsummer Night’s Dream was such a hit at Norton Priory Museum & Gardens recently that it’s been chosen as part of next month’s Liverpool Theatre Festival.

More than 700 people saw Electric Dreams at Norton Priory in June, when it had its world premiere as part of Halton’s Borough of Culture 2021 celebrations.  Supported with funding secured by Norton Priory from Arts Council England, the performance brought light and laughter, music and midsummer mayhem to the remains of the priory.

Produced by A Place for Us Theatre Company, the show is a 1980s outdoor musical adaptation of Shakespeare’s A Midsummer Night’s Dream.  Set against a 80s inspired soundtrack, the cast features West End stars Zoe Curlett, who hails from Widnes, and Keiron Crook as the warring Queen and King of the Fairies, joined by a professional cast, live band, and young performers.

Transport yourself to Midsummer Night in 1980s Athens. Four young lovers and a group of oddball actors find themselves entranced and entrapped in an enchanted forest where Rock Diva Fairies rule and a mischievous sprite is hell bent on causing havoc…what could possibly go wrong?

The production at Norton Priory was so successful that it was confirmed as one of the shows for the Liverpool Theatre Festival,  which runs from 1-12 September at the iconic St Luke’s Bombed Out Church, and the dates have been selected to launch the Liverpool’s autumn season of theatre.

There will be two performances of Electric Dreams on Sunday 5 September at 4pm and 8pm.  Tickets are available at https://www.liverpooltheatrefestival.com/whatson

Cllr Paul Nolan, Halton Council’s portfolio holder for culture, says: “The show was a great success at Norton Priory so it’s fantastic for the theatre company, the priory and the borough that it will be performed at such a major event as the Liverpool Film Festival – it’s a kinda Halton magic in the city!”