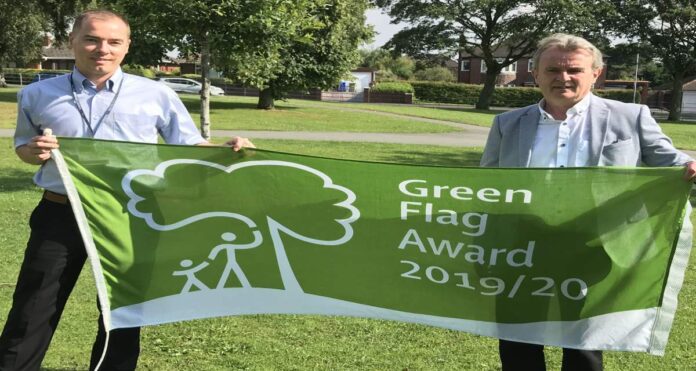 Three Halton parks have been recognised as some of the UK’s very best green spaces..

They have been highlighted at Green Flag Award Scheme  as one of the very best in the world.

The parks are among a1,970 UK parks and green spaces and 131 in thirteen other countries around the world, that this week received a prestigious Green Flag Award – the mark of a quality park or green space.

This international award, now into its third decade, is a sign to the public that the space boasts the highest possible environmental standards, is beautifully maintained and has excellent visitor facilities.

“We know how much quality green spaces matter to residents and visitors, and these celebratethe dedication that goes into our parks to such a high standard.

“Each flag honours the thousands of staff and volunteers who work tirelessly to maintain the high standards demanded by the Green Flag Award. We congratulate each and every winner on their fantastic achievement.”

Last year Victoria Park in Widnes, run by Halton Borough Council, was announced by Green Flag Award as one of the winners of the 2018 People’s Choice vote, beating hundreds of others to be in the top five in the UK.

It is the only park in Cheshire or the whole North West of England to make the cut.

Runcorn Hill in Runcorn, Cheshire, was in the top 25. Making it a double success for Halton,

Staff with plenty of bounce needed for Inflata Nation

Come and join in the farmyard fun