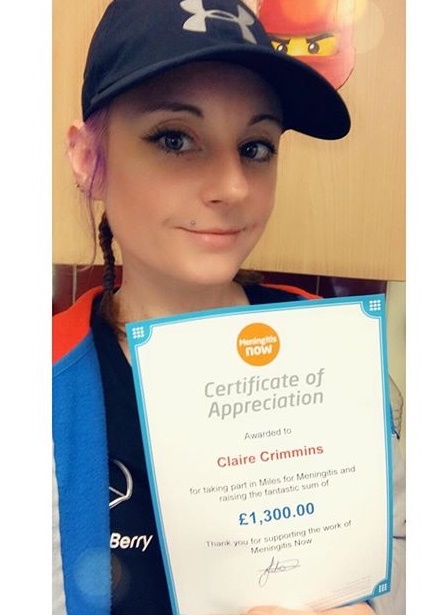 Staff and users at Halton Borough Council’s Brookvale Recreation Centre have raised £1,300 with a ‘Miles for Meningitis’ challenge.

It was the brain child of Runcorn 38-year-old mother of two, Claire Lou Crimmins.

She said she did it in honour of her son Kenny, now 15-years-old, who got meningitis when he was two in December 2005. It left him left partially deaf in both ears, is autistic and ADHD.

She said: “I’ve done a few fundraisers over the years but on the treadmill in the gym, but one night In October last year I thought of the idea to do ‘Miles for Meningitis’ for Meningitis Now.

“It means that the whole gym members take part on the treadmills, exercise bikes and spin bikes and that over a week everyone writes down the distance they’ve done everyday in the gym to see how many miles we could walk, run or cycle.

“We reached a total of 2,118 mikes which is distance Runcorn to Cyprus. I raised at the end of the week £1,161 but when I collected all monies in and people kindly gave more in the end grand total was £1,300.”

Halton Borough Council’s Executive Board Member for Sport, Cllr Phil Harris, said: “This was a tremendous effort for a worthy cause.”

Cost of dealing with waste in Halton adds up to £7m