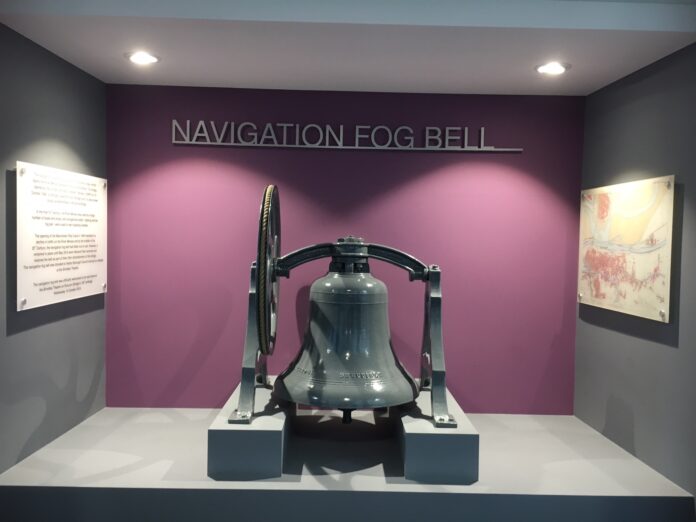 An historic bell which sat on top of Runcorn’s iconic railway bridge has been restored by Network Rail and put on display at The Brindley Theatre.

Today (October 10th 2018) is the 150th anniversary of the opening of the railway bridge and to mark the occasion, the newly restored Navigation Fog Bell  has been unveiled at its new home by Halton Borough Council and Network Rail.

The bell, which used to sound when there was fog to warn approaching ships on the Manchester Ship Canal of the Runcorn viaduct’s location, was removed by helicopter in May this year and repaired by Network Rail as part of their £6m renovation of the viaduct. It has been donated to Halton Borough Council and will be on permanent display at The Brindley Theatre.

Cllr Rob Polhill, Leader of Halton Borough Council, says: “We are delighted have the Navigation Fog Bell here at The Brindley. It is an item of historical significance and we are grateful to Network Rail for restoring it to its former glory so it can be enjoyed by future generations.”

Helena Williams, Scheme Project Manager at Network Rail, said: “We’re thrilled to have donated a piece of history from the iconic Runcorn viaduct to be enjoyed by locals and theatre-goers.

“We’ve been working in the area for just over a year as part of our £6m project to repair and restore Runcorn viaduct. This work has been vital to help keep this busy railway bridge, that is well used by freight and passenger services, reliable and safe for years to come.”

The bridge, which spans the River Mersey between Runcorn and Widnes, was opened by the London & North Western Railway on 10 October 1868. The Grade II listed structure was officially named Runcorn Bridge, but known locally as Aethelfleda Bridge after the Queen of the Mercians.  Remains of a fort dating from her era had been uncovered during the construction of the railway bridge.  The bridge also bears an image of Britannia, and because of this it is sometimes called the Britannia Bridge.

In the mid-19th Century, the River Mersey was still being used by a large number of boats and ships. Because of this, navigational aides – lighting and the fog bell – were installed to stop vessels colliding with the structure.

In 1894, the Manchester Ship Canal opened and that resulted in a decline in traffic on the River Mersey. The navigation fog bell had fallen out of use by the middle of the 20th Century.

A key part of Network Rail’s Great North Rail Project, the railway bridge refurbishment scheme started in October 2017. Engineers have strengthened, waterproofed and refurbished the bridge’s timber, cast-iron and brick structures. This work is essential to ensure this busy  railway bridge  can continue to support freight and passenger services in the future.

The bell was unveiled by Halton’s Mayor and Mayoress, Cllrs John and Marjorie Bradshaw. Guests included children from Runcorn All Saints CE Primary School who have been involved in a project around the Runcorn railway bridge with Network Rail.